Veena had married Ajay (both names changed)around 10 years ago when her father had suffered a stroke.She was quite reluctant to marry Ajay .The family pressures prevailed and she said yes .Veena knew about Ajay’s habit of smoking and she had also heard about his relationships with other girls .She had high hopes that she would be able to mould him and persuade him to quit all habits of bachelorhood after their marriage.She trusted him when in the first meeting he had promised her,”from this moment you are the only woman in my life ,and the occasional smoke and drinking that I used to have also I quit hereby”.She was shocked when one of Ajay’s office mate casually mentioned about their drinking bouts on office tours.

Veena was in for another shock as she had read some suggestive messages from an erstwhile girlfriend of her husband on his WhatsApp account. She had thought about giving her spouse an ultimatum but good sense prevailed and she contacted us for counseling?

“I have told my husband that “If you don’t stop all that you have been doing to cheat me, forthwith ,consider our marriage to be over “.I am here on the advise of my friends who want me to give our marriage one more chance. Although I have actually completely given up on him. He has shown no respect to our marriage of ten years”.

Smitha’s (name changed)husband has been an alcoholic for a long time now .He had been given all kinds of expensive treatment ,sent to rehab three times yet his addiction remained there. Ultimately she had decided to leave him and start life separately taking her daughter with her. But that last minute hope still remained when she called on us along with her husband.

It becomes a big worry as to how does one get one’s spouse to stop such behaviour as has been destroying one’s marriage?

An ultimatum to end the relationship if the spouse doesn’t mend behaviour is an interesting idea. Your friends or family members may have even suggested the same. Having been through the torture and turmoil of a bad marriage, it must have occured to you many times to end such relationship. It would have even been advised by your counselor. But will it work? if only ultimatums had changed long formed habits and addiction no marriage would have been broken .Ultimatums may work temporarily,bringing forth promises made under duress and to be broken after some time. Your getting angry never get your spouse to end their affair or stop their addictive or obsessive behavior.

In a sense, it’s empowering to think, and even say to your spouse, “Your behavior is unacceptable. And if it doesn’t stop, I’m leaving you.” An ultimatum offers the ultimate role reversal. It puts you, the victim, in control,but how long will that last . Very soon you will realise that it has all been in vain as the very bad habit for which you had given the ultimatum returns with a vengeance making mockery of your ultimatum.

Leaving home and the partner who doesn’t respect you could be quite appealing.

In the event of your filing for permanent separation it might feel the only choice but on a second thought you’ll feel ,”I could have tried harder .Maybe I did not try hundred percent to better things in my marriage “.

You may ask yourself the question ,” Will the effect of my decision in the long run be good? Will an ultimatum give me the desired results that I want? Or will leaving him temporarily lead to his quitting the addiction and eventually make things work in my marriage”?

You know the answer ,The answer obviously is NO.

But will such rules and conditions provide your spouse enough willpower and much needed motivation to live by the rules set by you and come out of addiction , the bad behaviour,obsessive compulsion or bad behaviour? In the words of Veena ,”I had set very clear rules but then I realised why would my spouse want to adhere to the rules set by me ?What kind of motivation had I provided to him for quitting his bad behavior.I have realised that the problem in adhering to the promises made by my husband is not the lack of rules; it has been lack of motivation and willpower to live by the rules”. 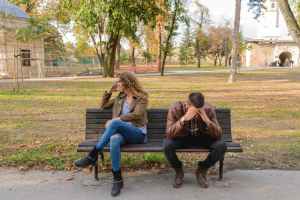 Every spouse fully well knows such a behavior is wrong,but sometimes the attractive addiction makes it difficult to admit that his behavior is not acceptable and that it’s destroying your marriage and taking away his sense of self respect. It’s not that he doesn’t care. The problem is that he lacks an internal motivation to do the right thing and come out of his addiction.Sometimes your spouse has to be helped strike the right key in his inner motivation, and build his willpower. An ultimatum imposes rules from the outside; it does nothing to address the lack of motivation on the inside.We help you and your spouse build your and your spouse’s inner motivation to achieve certain specific targets.We help you connect with your spouse and build up the willpower to come out of such undesired diversions of life .Once we are able to make healthy and meaningful connections the strong desire to do what the other partner wants takes place to make both of you feel happy and fulfilled. (Research has proved that the single most important factor that determines the fulfillment of a desired life style is always the happiness in the life felt through the connectedness of the partners )

Families who don’t have real emotional connection with each other will be diverted to anything in an attempt to fill that void in their life. That’s what leads people to alliances outside marriage, an obsession about past relations, obsessive commitment to success, work, or a hobby. The emptiness a spouse seeks to fill through alternatives is actually lack of a meaningful connection in his life.

We help you create that connection with your spouse, by Mindful Perceptive Meditation , Couple Counselling and Marital Relationship Therapy .This helps kindle the intimacy ,desire and respect in your marriage .A new found love and respect for each other eliminate your spouse’s desire for his destructive behavior. This also offers your spouse an emotional stability which he seems to have been missing probably since his childhood. Your spouse’s destructive behavior can probably be traced back to a disconnected relationship he had with his mother or father.

There is a very strong possibility that in spite of having been married for so long couples do not have any idea how to deeply establish a connect and they have been living all this while as disconnected two strangers. Such disconnect obviously makes your marriage totally dysfunctional. It may sound a little harsh but it’s true.

The time now is to come out of such disconnect and let’s together make your marriage more functional where spouses would respect each other’s desires and wishes.Our Couples Counseling and Marital Relationship Therapy along with Mindful Perceptive Meditation sessions will empower you:
a) to find a better connect in your marriage and improve your marital relationship.
b) to establish such an atmosphere at home for the family that will motivate your spouse to give his full support in the process of renewing and rejuvenating your marriage.

You take the first step today and find the much needed happiness by calling on us @9179383554 or write to us @mansikpramarsh@gmail.com